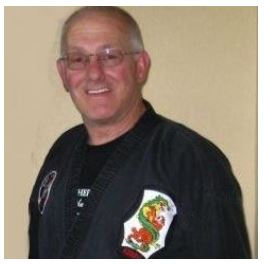 Grew up in Santa Monica, CA. My dad was a pilot in WWII who flew C47 troop carrier “sky train” over the Himalayas from India to Burma and China. Then he became a United Air Lines pilot. In 1967 he and my older brother who was a senior at Thousand Oaks High School were killed in a car accident on the Conejo Grade in Camarillo. When I graduated, I joined the Navy and I made three trips to Vietnam.

In 1983 we moved to Bend Oregon. My car broke down in a little Oregon town at midnight and two young men pulled up in a truck and came over to me threaten me to get out of their town. I told them I wanted to but my car was broken. My wife and two children were in the car. One guy punched me in the face, I had no training in fighting, but being a drummer I have very fast hands and punched him in the face. I locked myself in the car and as he was trying to let the air out of the tire, I got my car started and left. I immediately signed up my whole family for Kenpo lessons and obtained Black belt in 1990. I continued my training in Kenpo Hung Gar Kung Fu, and Ishin Ryu.

I am also an ordained minister in the Evangelical Church and an author. my book on Amazon and Barnes and Nobel is: Simeon the Prophet. I recently retired from my job at the University of Colorado Medical Center where I was the Industrial water treatment Specialist. We retired to Pueblo, ( my wife Gayle and I, who have been married since June 30, 1973. My two boys live in Parker Colorado, about 90 miles away from me. One is a senior underwriter for Travelers Insurance, with a wife and two children. My other son who was Lt. in the Navy, the Gunnery Officer on the USS Mustin (DDG89) now owns an Irish pub with his wife, they have two children. And he is also currently in the Masters program at University of Colorado getting his Masters in applied mathematics.