This has a great story around it. This is a one of kind and we never went into production with it; however we made some samples. An annapolis Naval Academy Grad was with the Marines when Master Brusso was working on the Marine Corps Martial Arts Program… 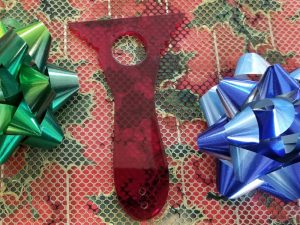 This was a design by the then Naval Academy Graduate who was with the Marines at Master Brusso’s location. He came up with this design and we made one. Then the unfortunate event happened his cancer came back and he ended up dying shortly after graduation. He named it the “polar bear”. So in his honor we have one of the originals here and will come with a certificate of authenticity which will site the story of this self defense tool’s birth! The Naval Grad’s nickname was “Powder” because during his chemo in his first year his skin became “white” like powder. Thus the name. RIP